Vira formerly served on the Amherst School Committee, where she chaired the school equity task force and helped to negotiate a fair contract with the Amherst Pelham Education Association.

Vira, who has a bachelor’s degree in sociology from UMass-Amherst, is associate director of an adult day health center in Hadley. She serves on Amherst Media’s board, and the state’s Asian American Commission, which she previously chaired. In 2016, Vira became the first Lao American to run for state representative in Massachusetts.

Vira first came to Amherst in 1993 to attend UMass, and settled here in 2006 with her husband Ed and two children. Her son is a member of Amherst’s Community Safety Working Group, and daughter is a freshman at Hampshire College.

From 2010-2013, Vira led a successful organizing campaign to free an innocent person from a life-without-parole prison sentence, an effort recognized by the Center for Women & Community, Spring of Hope Church in Springfield, and the Prison Birth Project in Holyoke.

After fleeing war-torn Laos at age five, Vira, her parents and four siblings spent about a year in a Thai refugee camp before the U.S.received them in 1980. Growing up in Dorchester, Vira graduated from Boston Latin Academy.

“I will use my voice to responsibly steward the land, act on climate change, and respect people who need to be seen, heard and belong at the table for real social, racial and economic justice,” Vira said. 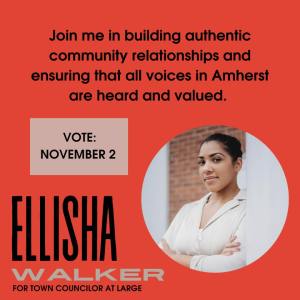 Ellisha Walker, who is the co-chair of Amherst’s Community Safety Working Group (CSWG), is an executive assistant and office manager at a law firm. Ellisha works within the justice system to serve those who face housing insecurity and discrimination.

Ellisha, who graduated from UMass-Amherst, is an Amherst native educated in our public schools, where she served on the Minority Student Achievement Network (MSAN) and with People of Color United (POCU). Now as the CSWG co-chair, Ellisha works toward equitable solutions to community safety challenges, through authentic engagement, research, and development of innovative proposals.

Ellisha has three children, including two ages 5 and 10 who go to Fort River Elementary, and a 3-year-old who attends a local childcare center.

She will bring a fresh perspective to the Town Council, as a Black woman raised in Amherst who can be a voice for the BIPOC community.

“I desire to leave a legacy of amplifying the voices of BIPOC, immigrant, low-income, first time home-buyer, and other traditionally marginalized community members who have long been disengaged … but are most impacted by the decisions our Council makes …these marginalized communities exist in all corners of our town and these voices deserve authentic representation,” Ellisha said. She is endorsed by Amherst Sunrise. 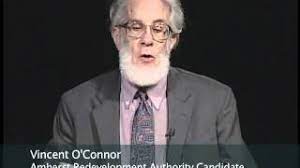 Vince has lived in Amherst for 47 years, served on six town committees, and won seats on Amherst Town Meeting for forty years. He is a longtime champion for social justice and civil rights.

In 1965, after organizing his college’s participation in the Selma to Montgomery protest march, Vince volunteered for the Student Non-Violent Coordinating Committee’s Arkansas Summer Project. In Arkansas, he worked for the voting rights of the Black farming community. Vince has been a political activist in Amherst and Massachusetts for decades, on issues including government transparency, housing affordability, community farming, dual-language education, and land conservation. In the last few years, seeking only gas money as reimbursement, Vince has provided daily dawn-to late-night rides to and from work for carless essential workers.

O’Connor will advocate for the renovation/renewal of Fort River Elementary as the Town Council’s top capital project priority. “The idea that every Amherst capital project, no matter how important, has equal priority is fiscally irresponsible,” he said. O’Connor believes that the financial health of Amherst will require the Council and School Committee to negotiate an agreement with Amherst College, for an annual payment in lieu of taxes of at least $1 million.